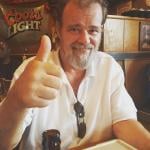 Mr. Robert Wayne Bunt, 57, of Talladega, passed away on July 1, 2016.
He is survived by his wife, Angela Bunt; parents, Pat and George Frame; brothers, Rick Frame(Letha), Brady Bunt(Lynn); sisters, Christine Martin(Douglas), Donna Campbell; granddaughters, Caitlyn Bunt and Mya Nadolski; step son, Michael Nadolski(Yasmin); nieces and nephews, Ronee Applebey(Chris), Chris Summers, Patrick Summers(Amanda), David Frame(Renee), Aaron Frame, Kristi Woods(William), Aaron Matthews; uncle, Billy Bunt(Ellen), James Henry(Jolene); aunt, Yvonne Coleman(Cylde); close friend, Danny Johnson.
He is preceded in death by his father, Robert Earl Bunt; grandfather, Herschel Bunt.
Robert enjoyed nature. He loved being outdoors, especially in the mountains. He liked four wheeling and was a very skilled wood worker. He liked working with antiques. He had a gentle spirit and was known to most as ‘Gypsy’. Robert strived to be positive in every moment. He would give the shirt off his back to anyone who asked and was never seen without a smile on his face.
Robert was a loving and devoted husband, PawPaw, brother, uncle and friend to all.
He will be terribly missed by all who had the pleasure of knowing him.

We held a celebration of life on Sunday.  We toasted his memory and shared our  stories. Just like Robert wanted.

Thanks to all here for support.  I think I am stepping away from the cancer world.  Eight years is enough.

Prayers for your healing