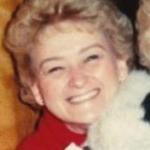 Has anyone heard anything from Donald I think it was Donald 57 not sure. But would love to know how he is doing since he had Zevalin like I did. I guess I am wondering if anyone has had Zevalin or Bexar and had a recurrence.