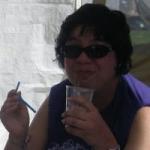 TheMWord Member Posts: 23
June 2010 edited March 2014 in Lymphoma (Hodgkin and Non-Hodgkin) #1
Hey there. My name's Melissa, and I was diagnosed with Hodgkin's (Stage IIB) last April. I've been in remission since December, when I finally finished radiation. I was in my second semester of freshman year, and still went to school during my treatments. I got through with almost no problems, with the exception of migraines, fatigue, and major weight gain. And yes, I still had a full blood count.

For any of you who are survivors, have you had severe depression post-chemo? I've been having a ton of cognitive issues, which has made school total hell, especially when I'm taking a summer math class. I struggled with depression prior to my diagnosis, but it seems to have come in massive swings. I also have been much more cranky and aggressive, and have been kind of reckless since I've had a clean bill of health. Can anyone relate? Is this just my age, or have any of you experienced this?

I still can't understand it, considering I had a great prognosis, no physical problems, or anything at all.
0