3 months scan results not so good 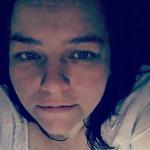 after removal of huge tumour and left kidney we had scans! Today's results showed a small spot on his right kidney.... oncologist advised us to see if it grows over the next 3 months and if it does burn it with some kind of needle! I just broke down! I am so so scared! We just got through this and now just 3 months later this? I