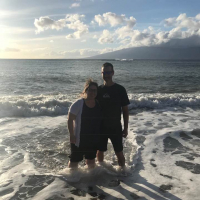 My husband has asked that I post an update for him.  He is usually a private individual but he has learned so much from so many of you who have shared your journey that he feels it is important to share his story for anyone who it might help.

Troy was diagnosed with rectal cancer on November 17th, 2020 following a colonoscopy.  He was 50 years old at diagnosis.  Upon further testing, his cancer was staged as stage 4 due to a met in the liver.  He started chemotherapy in January and he had 3 cycles of Folfox which caused him some complications with his liver enzymes. His oncologist then decided to switch him to Folfori and he was able to complete 6 treatments of Folfori before being switched to targeted oral chemotherapy coupled with 25 radiation treatments.

In mid September he had ostomy surgery and the surgery was successful in removing the cancer  (He did make the decision to have a permanent stoma at the surgeon's recommendation).  Weeks later, we received the pathology report and the news was very positive.  We were told that the chemo had worked very well on him and that there was no cancer in any of the removed lymph nodes or any other tissue taken from the surgery.  The original tumor was approx. 5 cm prior to treatments and had shrunk to approx. 3 mm.  He is considered cured and of course he will be monitored closely.

He does have some complications from his surgery.  He has not been able to urinate by himself since the surgery and he has had a catheter since his release from the hospital in late September.  They have advised us that this can be a common complication from surgeries and they anticipate the he will be able to regain his full bladder function with more healing time.  He is currently under the care of a urologist.  I will update you on this once he regains this function.

We are now about 9 weeks after his surgery and I can see that he is getting stronger and stronger.  The surgery was very painful for him at first.  He was not able to get out of bed for several weeks but the pain is becoming less and he is now able to sit for longer periods and has started exercising again.

With a stoma, he was very concerned about the foods that he could or could not eat.  We waited past the 6 weeks to start trying nuts and salad.  He ate mild foods while testing each new food a little at a time.  With our research what we found was that every person is so different that what one person can eat does not mean that another person will be able to eat it.  However, I will say that we waited past the 6 weeks to test some of the known foods that he may not be able to tolerate and I think this helped him heal better.  He is now eating nuts and salad with no issues.  This was exciting for him.  I will also say that at week 3 he made the mistake of trying a Big Mac because he was really craving it.  That left him in a lot of pain and I can guarantee you that he will never crave another Big Mac again.  Not worth it!

Prior to Troy's fight with cancer, he used to have a busy work life.  So he would eat on the go.  Since his cancer diagnosis, we have put a focus on nutritious food (minus the Big Mac mistake).  We'll never know if this helped him with his outcome but our focus on nutrition gave us something that was more under our control since it felt like cancer was taking the control of our daily lives away from us.  Things he stays away from are preservatives in food and he tries to eat some antioxidant foods every day.

Lastly, I want to mention that Troy was scared and nervous about having a permanent stoma but he will be able to do his favourite things such as golfing and maybe even mountain biking again.  He's already in a new routine and life is becoming as it used to be again.

Our hearts are with all of you fighting this fight!