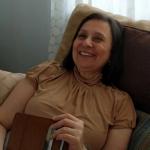 Hi all. Hope you are all doing well in these crazy times.

I was diagnosed with endometrial cancer last year; grade was 3 so I had a hysterectomy really fast on April 15.

I was staged 1A. The pre-operative scans revealed 2 lung nodules (stable at 3mm each up till now), but also a section that is 0.9cm of ground-glass opacity. I also have a tiny 3mm "lession" in liver that has not grown and doesn't show up on ultrasounds.

CT scans have been done since March 2019: 3/19, 9/19, 12/19 and 7/20. The radiologists reports have been saying the same thing all along: lung nodules stable, ground-glass opacity stable, probably benign.

My pulmonologist almost drove me crazy 12/19 because she "saw more than the radiologist saw." Sent me for those 12/19 CT scans and for tuberculosis tests (negative) and called me next day 12/24/19 to tell me everything was OK.

Forward to 7/20, two weeks ago, when I went for the CT scan. She called me into her office again and said she doesn't trust the radiologist report (again) and that she wants to do a VAT-assisted surgical biopsy. She talked to my oncologist and it looks like she convinced her I should have this.

It's still surgery, though minimally invasive, but I've read a lot about how this procedure gets overused. I read everywhere that a PET scan should be the next step, but don't know why that's not suggested.

Has anyone had this kind of biopsy? They're saying it's only a one night stay and that it's a same-day procdure and they're pushing for it to be done as soon as I can. I got my two last CT scans on a CD, but pushy doctor and nurses are saying things like "it's no use to send to another radiologist, because they might say the same thing as this one, and they don't make the diagnostic decision."