When are you considered a survivor? 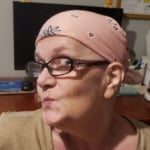 I go for my first scan since surgery tomorrow, and I've been thinking a lot about this lately. I shy away from the term "survivor" because I don't feel I've met that goal yet.

I'm interested in know what all of YOU think the term survivor means.