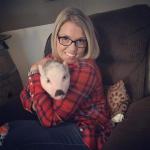 In April I was seen in the ER for left side flank pain. I was worried as I often get infections or stones and never know until somethings gone really wrong. I can't feel them for some reason. Well the doctor did a CT scan to check for stones and I did not have any. Not any passing that is. But I did have a large cyst. Apparently I have had this thing for a while and no ones told me. Not even the urologist who did my lithotripsy (SP). The doctor said I needed to see a urologist. So I did... A few months later of course. The doctor said it looked like a simple cyst and sent me for an ultrasound. Well.... that was a terrible idea. Comes back it's not a simple cyst it's a complex cyst with septations and an irregular wall? Whatever that means. Its also doubled in size in the last 5 years. Now measuring in at a whopping 5.5 X 4.9 X 5.7 cm. The doctor said he was concerned at the growth rate .66 cm a year average. I was too busy trying to negotiate with him about why it was obviously slowing down since it grew more between 2011-2013 then between 2013-2016 (totally not factual but it sounded good). He stopped me and said "Channa, cysts do not grow. They certainly don't double in 5 years". I said "well what the hell does grow!?!" He deflected with "the good news is it's in a good place if it needs to come out" and "Im ordering a CT scan and I want to see you back in two weeks for the results". He waited 3 months to get the ultrasound to see growth. But now he wants a CT this week. I left, trying to remember to breathe and realized he never answered my question. If a cyst doesn't grow..... What does? Anyone? Cause Google says I either have cancer of the kidney, the plague or chlamydia.