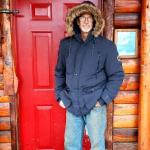 I am usually a regular on the Head & Neck forum.  I was dx with base of tongue cancer October 2011, finished rads and chemo in January 2012 and I have been NED ever since.

Almost 100% of my followup has focused on the lungs and neck area, but not the brain.  One time during a regulary CT w/ contrast follup up they caught some suspicious spots on the top of my lung, but turned out to be infection.
So my follow up has always been on neck and chest.

However as of this past fall (I'd say around September 2013) while out hunting I noticed I was having a bit more problems with an irregular heartbeat than usual.  I am prone to PVC's (premature ventricular contractions and have been all my life).  Those PVC's usually come when they want and of course can occur with too much caffeine, lack of sleep or rest.  These PVC's were coming in an unusual manner, they were coming with exertion mostly, and quite frequently.  I've noticed my left are (I am left handed) seems shakey when I write and I have a weak feeling in my upper body (arms, neck) almost like a person has when they have low blood sugar. I'm dizzy and light headed just walking and especially when I bend and lift.  Not always bad, but certainly noticable and even more so with exertion.  I get what feels like a littel vibration in my chest at times, though it feels funny, it does not seem to relate to the PVC"s and PAC's I am having.

When I hunt I carry a 30lb pack, climb steep terrain and carry a rifle and shotgun (I live in central Idaho next to the Frank Church Wilderness area). I'm 5'11 and weigh 218lbs.  So I feel I'm healthy but certainly no athlete.

This  past week I had a full workup on my heart.  Echocardiagram, running stress test and they actually caught quite few of those PVC's and PAC's (premature atrial contractions) on the screen, yeah!  Doc says my heart looks great!  No issues whatsoever.  He simply said something is aggravting your heart rythm so he prescribed Digoxin very low dose.  I've been laying off nearly ALL caffeine for more than 2 weeks (I don't drink coffee).

All that to ask...can anyone share their symptoms before they were dx with a brain tumor / cancer?

I know X-rays don't show much in this area, but I did ask for and plan on just starting off with an X-ray of the head so if there is something large / solid, it might can be spotted.

I don't want to self dx here, but I have been under a tremendous amount of stress as of late due to caring for and securing guardianship of my mother who was dx with moderate dementia, a physical move from one home to the other (and all the stresst that goes with that) as well as I have a high stress job.  Could all of this truly be stress enduced??  I' ve been in the same business for 14 years and have never had all these symptoms before.