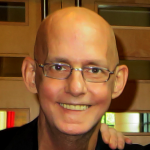 The cancer gods have thrown me a double whammy. After kicking anal cancer last year, I've now been diagnosed with Stage III (Maybe IV) Hodgkins Lymphoma, so I guess I'm moving to this forum now. I had a marrow biopsy to see if it was Stage III or IV but it was inconclusive, and I ain't letting 'em do another (ouch) since it wouldn't make a difference in my treatment anyway. Just started ABVD chemotherapy last Friday. So far the only side effect I have noticed is a painful tongue ... not so much the tongue hurts, but my taste buds hurt when I first start eating or drinking. Is there something I can do about this other than swish with Magic Mouthwash which will kill the taste of my food?