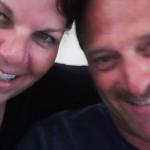 my 50 year old husband was recently diagnosed with right kidney cancer 2 weeks ago its stage 4 with multiple mets to pelvis, spine and lungs. biopsy has been done but while he is waiting for the results they have started him on sutent 25mg daily, steroids, just completed 5 rounds of radiation on his spine can anyone tell me anything that might help. He could not have the nephrectomy as his vena cava is encased by a portion of the tumor and could not be safely resected. Up until 3 weeks ago my husbands health had been excellent and in fact he had a total hip replacement 1 year ago for arthritis caused by years of playing soccer where he had full lood work, a ct, chest xray and bone scan prior to and nothing showed up, We live in Canada have 3 daughters and we are having a difficult time trying to understand all the information and I am hoping someone on this site my be able to help.