TIME TO DO BATTLE AGAIN 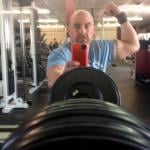 luv4lacrosse Member Posts: 1,410 Member
August 2012 in Lung Cancer #1
Hello, I leaped over here from the Head and Neck boards as I think my cancer may have spread to my lungs. In short, October 20 was supposed to be my 2 year cancer free birthday, but a huge staph infection from last Sunday gave way to a CT scan of my head neck and chest. It was with this scan that 3 nodules were discovered in the right lower lobe of my lung. One of the nodules, the biggest at 1cm x .6cm was originally discovered this past march and was not of any concern then as I had a previous nodule on my right upper lobe that dissapeared after a 6 month check up.

I am to see my thoracic surgeon next thursday to see where we go from here. It was mentioned that all three nodules are too small to do a fine needle biopsy so a wedge resection would be in order, and then send the wedge of lung tissue off to pathology for review.

I am looking to hear from anyone who has been in this situation for some advice. I do not know anything regarding treatment and % of positive outcomes. I have always viewed lung cancer as a death sentence.

If someone can tell me different and educate me a little, it sure will help with the nerves and my sanity.