Pls Help Me Quiet the Hamster Wheel of My Mind 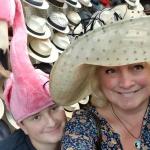 I have been lurking on this board all day and love how supportive everyone is.

I pretty much stopped having a period from about 40 years old to 48.  I attributed it to early menopause.  I started bleeding heavily last year and was diagnosed with endometrial hyperplasia.  It was not atypical.  I took aygestin for a few weeks and the heavy bleeding eventually stopped.

A couple of months ago I started to bleed heavily and it never really stopped.  I had a hysteroscopy on Oct 9th with a couple of polyps removed.  I received a call yesterday from my Gyn that I have endometrial cancer.  He didn't give me a lot of details but said it is the more agressive type.

I was able to get an appointment this coming Monday, Oct 19th with the Gyn/Onc he referred me to.

Needless to say I am in a state of panic / dispair / depression.  All I can think about is my son not growing up with his mom.  I lost my mom to mulitple myaloma last year so she couldn't step in.

Does anyone have advice on how to stop these thoughts from overtaking my sanity?