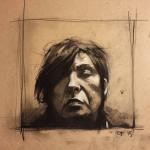 I'm 35, and over the course of several months I have been dealing with constipation, bad menstrual pain, and diarrhea. 6 months ago I got an ultrasound, and they said the ovarian cyst looked normal.

Fast forward to the last month. I have bloating that won't go away. And it's not normal looking bloating....it looks like I'm 2 months pregnant. I'm not pregnant (I'm a lesbian). Also having weird intermittent pains on the right side and some nausea. In the last week I've had frequent urination, mostly at night. In the last 5 days I've either lost my appetite or get full quickly. I've been drained and overall just feeling weird.

Those symptoms were enough for me to go into the ER where they did an ultrasound. The tech said I had several cysts. 30 minutes later the ER doctor came in and said "the radiologist and I looked over your scans and find a polyp on your endometrium that might be cancer. You need to call your doctor and schedule a biopsy sooner than later".

And that was it.

My bloodwork was normal.

She just came in and threw the Cancer word at me and left. I felt angry about that. Why didn't she just use the word "abnormal" knowing it was a Friday and I'd panic all weekend.

Anyways, I have another ultrasound scheduled with my Gyno on Tuesday. They want to see it for themselves.

I have other weird symptoms like random canker sores (which I never get) and my skin feels desensitized and I get hot and cold.

I would prefer to just think it's nothing but stress or a bad diet, but that darn doctor had to say what she said and now I'm worried.

I mean, if my bloodwork was fine...I should be okay, right?